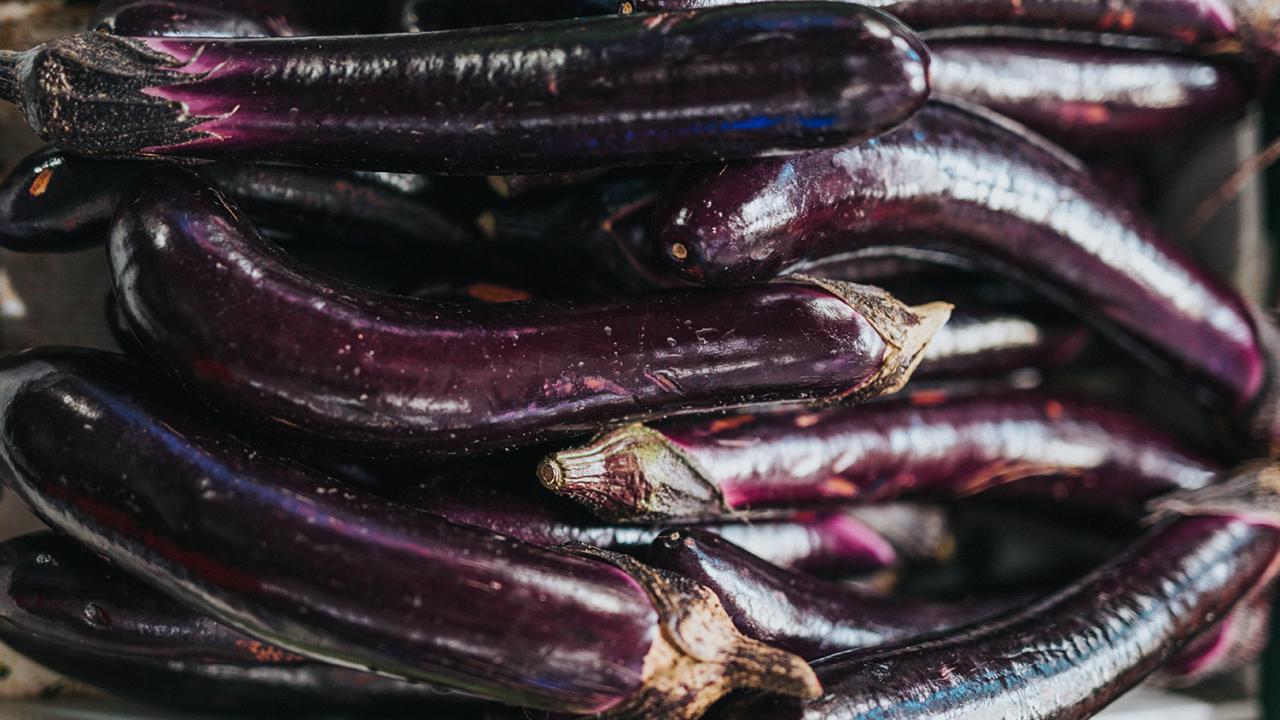 Eggplant: A Savory Fruit with a Juicy Past

Eggplant: A Savory Fruit with a Juicy Past
June 29, 2018
Michele Redmond, from Food & Nutrition Magazine

Native to India and Southeast Asia, and now one of the world’s most economically important global food crops, eggplants — or aubergine, if you’re in France or a country in the Commonwealth of Nations — are as colorful as their past. Like tomatoes, eggplants start as flower buds that bear plump, seed-filled fruits and are members of the nightshade plant family, Solanaceae. Eggplant cultivars of Solanum melongena — like America’s most common variety, the purple globe — range in color and size similar to grapes, tomatoes, mangos and squash.

Eggplants have a savory flavor with sweet notes, but bitter alkaloids dominate in the peel and reside in the seeds, particularly in overly ripe eggplants. Plants can be peeled or semi-peeled just before using to avoid browning. Remove alternating strips lengthwise to keep some texture and color. Leave the peel on for stuffed, baked eggplants or grill them whole until the skin chars and the flesh becomes a smoke-infused pulp to use in baba ghanoush and mouttabal, a garlic- and tahini-based dip.

Eggplant flesh is a mesh of tiny air pockets that absorb oils and liquids like a sponge. This quality is ideal for making silky purees, custards or sauces but can turn eggplant slices or cubes soggy, a texture that is undesirable for caponata, ratatouille, chutneys and mezze platters or in casserole dishes such as eggplant parmesan or moussaka.

To maintain a firm texture and limit oil absorption, coat eggplant with oil just before baking, roasting or grilling. When sautéing, heat oil to a pre-smoke point before adding eggplant to the pan. Choose firm eggplants for the best texture results; if cooking with overly ripe eggplants, remove excess liquids to reduce steaming and collapsing air pockets. The easiest method, which takes only a few minutes, is microwaving slices, cubes or medallion cutlets between paper towels and pressed between two plates. Other options include microwaving slices open-faced on a paper towel-covered plate or placing eggplant slices between two baking sheets and heating in the oven. Pre-salting, a more traditional method, requires generously coating the flesh with salt and allowing 30 minutes or more for liquids to release before blotting with a towel to soak up liquids and remove excess salt.

A low-calorie vegetable with 35 calories per cup (when cooked without additional ingredients), eggplant has a rich phytonutrient composition, including phenolic acids and flavonoids which have antioxidant and possible anti-inflammatory benefits. The flavonoid nasunin contributes to eggplant’s purple tones and may help improve brain health by reducing neuroinflammation and improving blood flow and synaptic signaling.

Like other nightshade vegetables, eggplants contain alkaloids such as solanine, which may trigger inflammation in some people. More research is needed on potential inflammatory reactions. Eggplant leaves are toxic and should not be consumed. Eggplants also contain oxalates which may be a concern for some people.

Eggplant is available year-round with a peak season in August and September. Fresh eggplant stored at room temperature maintains better texture and flavor but should be used within a few days to avoid softening and wrinkling.

For high-quantity purchases, refrigerate to extend storage to a week; however, refrigeration hastens browning and makes seeds more prominent. Ignore claims that seediness varies by sex; in reality, eggplant fruits are neither male nor female, and seeds vary primarily by age and cultivar.

Look for a firm green cap, vivid peel color and firm skin that doesn’t leave an indentation when lightly pressed. Eggplant yields decease by nearly 20 percent from trimming skin and stems and shrink further during cooking.

See the recipes that accompanied this story:

Michele Redmond, MS, RDN, a registered dietitian nutritionist and French-trained chef, specializes in culinary nutrition, taste literacy and how culture affects food enjoyment and health. She directs The Taste Workshop in Scottsdale, AZ, and leads workshops in Paris. Michele blogs at LeBlog.com. Follow her on Instagram, Facebook, Twitter and Linkedin.

Staff and Faculty Health and Well-being

June - Tips to Keep You Cool and Healthy This Summer

May Wellness Ambassador of the Month | Howard Channel

May - Small Self-Care Habits for Balance and Wellness