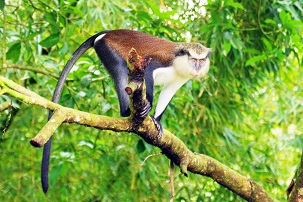 In summer 2018, a UC Davis graduate student visited a wildlife sanctuary in western Africa to learn about the local fauna on a guided tour. The student was not conducting field research at this time, but the incident could have just as easily happened in the field. Based on the advice of signs at the park entrance, the student wisely decided not to feed or touch the animals. However, a park guide was using food to encourage monkeys to interact with visitors. One of the monkeys, friendly and accustomed to being fed by guides and visitors, climbed up the student’s arm to reach for food and left a shallow scratch.

The student washed the scratch right away with water and later scrubbed with soap. They visited a local hospital, where they received a tetanus injection, and then contacted a supervisor back on campus for advice about rabies vaccination. The supervisor contacted EH&S. Fortunately, the student had received two of the three scheduled injections of the rabies pre-exposure vaccine in advance, conferring approximately 80% immunity. After consultation between a physician, Biosafety staff, and other subject matter experts, it was determined that rabies was a low risk for several reasons. The student had partial immunity, the injury was a shallow scratch and not a bite, the animal was not behaving aggressively, and there were no recent reports of rabies in local monkeys.

However, there was initial concern about the herpes B virus, which is common in several species of Old-World monkeys and fatal in humans. The student identified this animal as a mona monkey, which is fortunately not a carrier for herpes B. If the animal had been a macaque or another carrier species, doctors would have recommended prompt treatment with antiviral medication.

The student was right to wash the scratch, seek medical attention, and to ask for expert advice, as there was a potential for exposure to two deadly viruses. Having the first two rabies injections also conferred partial immunity and decreased the chance of infection. Knowledge of the species of monkey helped to rule out herpes B infection.

What could be done differently?

Complete the full course of the rabies pre-exposure vaccine, or any other vaccine recommended by your healthcare provider.

Avoid contact with wild animals when possible. This may be difficult in a crowded tourist attraction where the animals are encouraged to interact with humans.

Background on rabies and herpes B

Rabies can infect any species of mammal, with some species at higher risk than others, and it is transmitted through saliva. A bite wound is the main exposure route, although scratches should also be evaluated for exposure risk. Rabies infection is incurable and almost always fatal in humans after symptoms appear, so prompt post-exposure prophylaxis is crucial. Treatment is a series of four to five injections of a vaccine and an injection of Human Rabies Immune Globulin, starting as soon as possible after exposure through a bite or scratch. For people who may be exposed during their work with wildlife or travel to high-risk countries, a pre-exposure vaccination series of three injections may be recommended. Pre-exposure vaccination simplifies the post-exposure treatment protocol, which is important because treatment may be unavailable in many rural areas. Consult with Occupational Health or Student Health before traveling to rural areas in Africa, Asia, Central America, or South America.

Herpes B virus occurs in macaque monkeys and is transmitted through bites and scratches. The virus is often fatal in humans if not immediately treated. First aid for monkey bites is to wash the wound for at least fifteen minutes with soap or disinfectant and running water, to reduce the risk of infection. Treatment for exposure to herpes B is an immediate course of antiviral medication.

Use to help improve safety in your lab. Provided by the UC Center for Laboratory Safety.